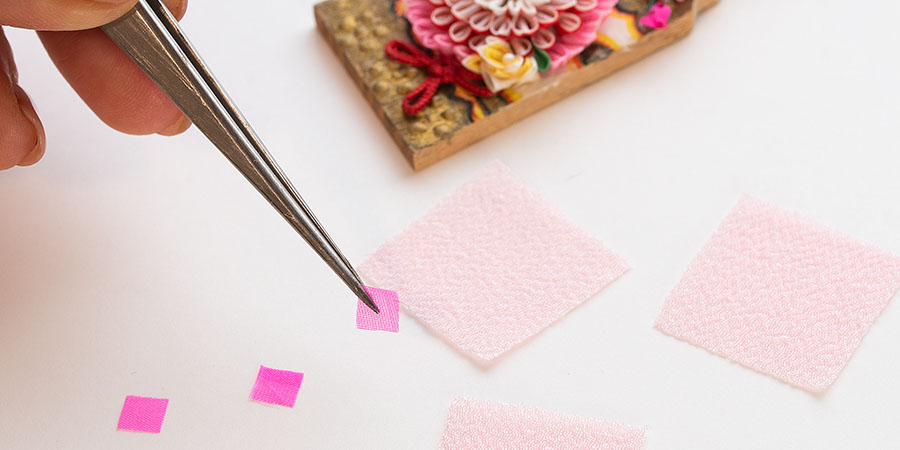 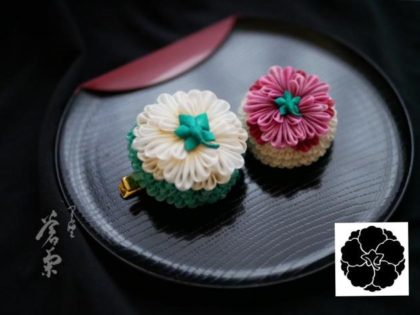 There are about 20,000 different family crests in Japan, and it is said to have originated in the mid-Heian period (900 – ). In the beginning, it was a sign of the aristocracy, rather than a family crest, and was based on the motif of vessels and flowers, birds, wind, and moon. Eventually, warriors began to use it to identify allies and enemies on the battlefield, so the crest became very simple.

In the Meiji period (1868 – ), even the common people were allowed to have their own family name and family crests, and the culture of family crests became widespread.

The family crest, which can be interpreted as the identity of the Japanese people, is expressed with tsumami-zaiku. “Tsumami-mon” is the new art Ms. Aogiku invented. We interviewed her and would like to share some works of“Tsumami-mon”.

What inspired you to invent the “Tsumami-mon”?

What type of customers do you receive orders for “Tsumami-mon”?

Orders are varied, but most of them are ordered by mothers for their daughters, for Shichi-Go-San (Children’s celebration for 3, 5, and 7 years old) and for coming of age ceremonies. When we receive orders, we get the impression that they value the importance of passing on the family crest to their own family for the events in their lives.

Other orders are for gifts for public theater and stage actors.

Tsumami-mon, a collaboration of traditional craftsmanship and family crests, is a significant piece of work that expresses Japanese identity through the handiwork of Japanese artisans.

The “Tsumami-mon” is one of the new ways to express tsumami-zaiku and we can feel the possibility of further development of this craft.

If you have a request for “Tsumami-mon”, visit here